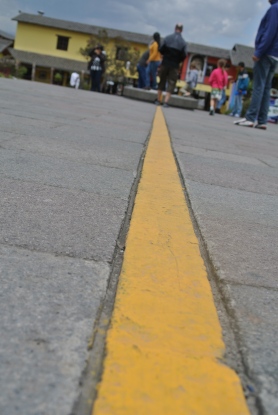 Today we head to Mitad del Mundo – Middle of the World – The Equator. There are two equators here, the original one and a second more accurate one (since the invention of GPS). Rather than real and not-so-real one, they prefer to be called old and new. We head to see both. 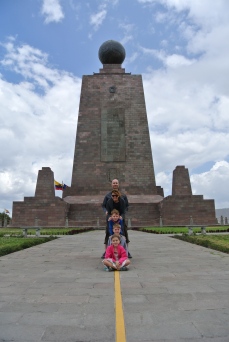 At the new equator (red line), the tour includes Ecuadorian culture and traditions – we learn how men in amazon tribes tie their bits up high with string to help avoid penis fish swimming up their urethra, how they shrink the heads of their enemies, how their spears have one end for animals and one end for humans (still used today in some parts of the Amazon where they are fighting with miners and poachers), how there are two doors in all Amazonian huts, one to come in and one to go out, to help keep bad spirits away, how the tribe wives were buried alive (dosed with sedative) alongside their husband on the male’s death. 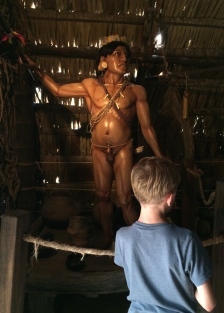 The most alarming thing I learnt today was that the tradition of shrinking heads is still carried out today – but today it is practiced in order to fulfil international collector’s desires rather than because of any cultural tradition. Rather than wait for someone to die of natural causes and then cut the head off, remove the skull and shrink the skin, they will still choose to kill someone that has wronged them in order to fulfil the order. The middle man profits the most – heads are sold within Ecuador for $25,000 and then for more than triple around the world. The tribes, apparently, get very little. (We were told not to worry, we wouldn’t be targeted as the collectors want strong Amazonian facial features for authenticity.) 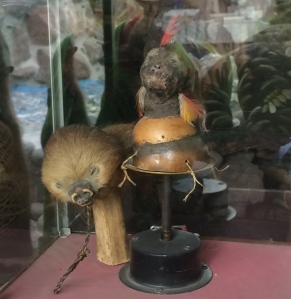 The tour includes several experiments that take place both on and around the equator. The tour guide was full of facts and the experiments were brilliant. It’s safe to say today’s trip pretty much nailed science for the kids this week. They learnt all of the following with no dramas, no negotiating, no bribery and no planning or research on our part:

And then… there was the sink experiment! Does the water spiral down the plug hole in different directions if you are a) on the equator, b) in the northern hemisphere, and c) in the southern hemisphere. Watch this video – you could probably win bets with this.

Oh and here is the video of our ‘balancing an egg on a nail’ experiment.

On the way back we hiked down into Pululahua Volcano, which is now green fields, inhabited and farmed! Well… when I say hiked, what I really mean is skidded down on a lot of loose stones, desperately hoping that no one took a tumble as I had forgotten to bring any form of first aid supplies. It appears that Clarks girl’s velcro trainers and two sets of Nike’s football/astroturf boots may be an inadequate choice to hike down a volcano. To top it off, as we hiked back up, trying to cope with the effects of being altitude novices, a lady who lives down in the valley literally sprinted past us on the same rumble we’d been skidding all over twenty minutes earlier. 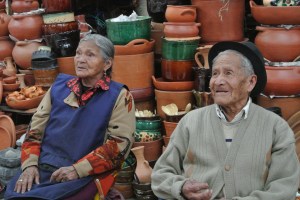 Gorgeous couple we met at the market.