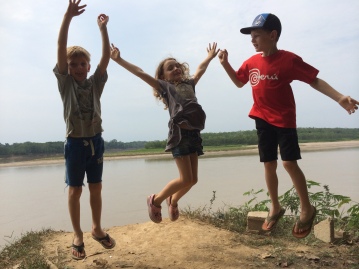 It’s our eldest son’s 9th birthday today. What do you get a nine year old in the jungle, with an already full backpack?

We chose… a baseball cap, a new crisp clean t-shirt, a packet of haribos and an Amazonian keyring. The simplest set of gifts he has ever received. He also receives handmade birthday cards and a card from grandparents that we’ve been carrying around with us since we left the UK.

The manager of the hotel delivered a personalised birthday cake to him at dinner last night, along with a Spanish rendition of Happy Birthday and this morning one of the guides is taking him on his own personal tour of the jungle – which he has decided to invite his siblings to. Hopefully making this one of his more memorable birthdays!

His birthday jungle tour was a success; more spiders, monkeys and macaws on secret jungle trails they hadn’t been on before.

It’s our last day in the jungle as we’re travelling to Cusco and onto the Sacred Valley and Machu Pichu next. So, back in the canoe, back along the river and back to the butterfly house. EVERYONE gets out a phone at the butterfly house as soon as they hit the wifi signal and you can hear a groan when the transfer to the airport is ready, no one appears to want to disconnect.

We then enter Puerto Maldonado airport… the HOTTEST AIRPORT IN THE WORLD. An airport which has also RUN OUT OF BOTTLED WATER!

It seems the only place where the air conditioning is working is the mens toilet, don’t ask me why. So far this is our worst airport experience and it was about to get worse.

As we go through the x-ray machines, an over zealous security guard decides to put a pin in the boys’ football to deflate it. This ball has travelled, successfully, inflated, from London to Miami, on four flights all over Ecuador, two flights already in Peru, even on the same carrier as his employer – twice. Nine flights under our belt with the same exact ball tells me that it is not about to explode onboard.

But at this crappy little airport, with no water and no air conditioning, where we are about to board one of our shortest flights is where we have our first ‘scene’ of the trip.

You see… the children don’t have much to play with and our boys play with that football every day…. and we don’t have a football pump and I’m pretty sure we’re going to struggle to find one in Machu Pichu amongst all the alpaca jumpers.

The boys are absolutely devastated. There are tears, there is shouting, there is blame, there was very nearly swearing and name calling, but as they do ultimately have the power to refuse access to the plane we calm down a bit. There was finally an apology, followed by a non-acceptance of that apology and the promise to the boys of the purchase of a pump as soon as humanly possible. I know they are allowed to do it – my point is, they didn’t *need* to do it, especially on his birthday. 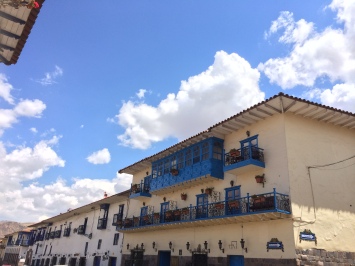 Cusco is at high altitude and we’ve booked two nights instead of one to help the family acclimatise before we travel onwards to Machu Pichu. The place is lovely and warm and we’re met at the airport by Mateo. We ask his help to rectify the football situation, hoping he might know where we can buy a pump. He doesn’t.

We’re offered coca candy and told that the hotel will give us coca leaf tea and we should all have it – including the children. On the transfer we see school children in big jumpers, woollen tights and boots. I look at what we’re wearing and four of us are in shorts, and all of us are wearing flip flops.

Mateo takes us through the itinerary for the next few days. I find out that we will be spending over nine hours on a train in about a weeks’ time. NINE HOURS. Apparently it’s a very nice train, but that had totally passed me by… I make a note to pay more attention when we book stuff.